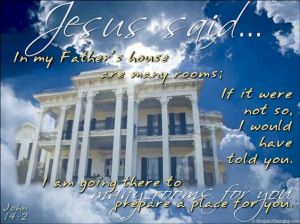 I am reminded of the dreams of a terminally ill young man.    He was a hospital patient with a rare disease and wanted to share his dreams before he died.  I was asked to come and talk with him because I had recently taught a class at that same hospital on the relationship of dreams to health and well-being.

When I met with him he had perhaps several weeks to live.  He was pale and weak.  He thanked me for coming and said he just wanted to talk to someone who appreciated dreams because he valued his own and wanted someone who would not take his remarks lightly.  Often it is hard to find people who take dreams seriously, and one certainly doesn’t want to be laughed at or about when sharing a dream.  So I told him that I had studied dreams for many years and had taught classes on the subject.  I was very interested in his dreams and would be glad to listen.

Dreams of Many Mansions

The young man told me about a series of dreams he had in the weeks before about seeing a city of many gorgeous homes and magnificent buildings.  He thought that he would be going where those buildings were and live there.  I asked him how he felt about this.  He said the dreams were so beautiful that he wanted to be there.  He said the dreams made him feel comfortable.

Quite often, images in dreams with remind one of imagery in the Bible; however, at the time, I didn’t connect the imagery of many beautiful homes and buildings to Jesus’ quote (John 14:2) that in…”in my Father’s house there are many mansions…” but somehow, I think the young man did.  He passed away a few weeks later.   I would like to think he is there in those mansions.  Certainly, his dream comforted me, fulfilling another role of dreams:  that they often have meanings for others besides the dreamer.