Edgar Cayce is considered by many to be the father of holistic medicine. This course will explore how Edgar Cayce intuitively diagnosed and healed, viewed dreams and intuition and show how his tradition continues today in the methods developed by the Edgar Cayce Institute for Intuitive Studies.

To learn more about dreams, visit my website at http://www.healingdreamgarden.com.

One of the important functions of dreams is to inform us about our state of well-being, and this includes information about our physical health in additional to emotional or spiritual health. It is not surprising then that when we start to remember and record our dreams we will begin to see references to health and health issues, literally or symbolically in our dreams. Two such health related dreams are those 1) warning us of a health issues or 2) telling us when things are fine. Here are two examples from my own life:

Dream Example: Blood in My Stool

An authoritative voice tells me that I have blood in my stool.

On hearing this voice, I immediately woke up. Naturally, this aural dream which presented only as a voice saying these words frightened me. I was due for my annual physical exam in a few days so I made it a point to tell my doctor about the dream. My doctor took the dream very seriously and gave me a stool sample card which I took home and over the next several days I collected stool samples. When the results of the tests came back, sure enough, it was found that I had blood my stool. I was immediately scheduled for a colonoscopy. I apprehensively waited for the day of this dreaded test but before the test was blessed with another dream:

Dream Example: Getting a Good Result on a Colonoscopy

I am in a medical setting and a doctor is giving me a colonoscopy. I can see the progress of the camera in my colon on the monitor. He says everything is OK!

This dream brightened my spirits. A little while later, I had the colonoscopy and was awake enough during the procedure to see the monitor, reminding me of the dream and test result. At that point, I was quite sure I would get a good result. And sure enough, I did!

I found it interesting that my dreams coincided with both test results, even though they showed different outcomes.

Much has been said on this website, in my classes and in other places how it is possible to intend or ask for a dream or specific piece of intuitive information to help heal or resolve an issue. All that is possible but I would be very remiss if I did not say that there are times or a long period of time when all the praying or intending seems to produce no immediate or apparent result, no matter how often one prays and intends. This can be a very difficult experience if one has become accustomed to receiving answers in dreams or meditation. Often, it is enough to make one lose heart and give up on the practice.

What to Keep in Mind

This period of darkness has had many names in spiritual practice. A common one that has held over the centuries is The Dark Night of Soul. It has also been described as a dry period when there is no productivity or creativity. A sense of being lost and or a profound feeling of emptiness are yet other descriptive characteristics. Here are some pointers to keep in mind if you are experiencing this phenomenon:

I have found these dark times to be reflected in dreams with images of the full moon in a dark sky, of being lost in a foreign city, or the lack of dreams and insight altogether—even when I pray or intend them. For me these kinds of dreams or lack of dreams are clues telling I am going through a Dark Night period. It happens to all of us on the spiritual journey. But remember, answers come when they are meant to come, and when we truly need them. So keep intending and praying for the dreams and inspiration you need. Guidance will come!

One of the eye-opening experiences about dreams is that we may see a visitor from the divine realms in our nocturnal reveries. I think this happens more commonly that most people would let on, being reluctant to say in casual conversation something like, “I had a dream about Jesus last night.” Actually, this happened to me several times over the many years that I have been recording dreams and I am sure something similar can be said by anyone else who has been keeping a life-long dream journal.

In my case, long ago I had a dream about Jesus sitting by himself on center stage in an auditorium. The lighting was focused on him and he was looking out to the audience. That was all there was to the dream. At the time, I wasn’t sure what the dream meant. While I have always been a believing Christian, I was raised Catholic where there was a whole host of spiritual beings that were held in high regard starting from the Father, Son and Holy Spirit to the angels and archangels and then the Blessed Virgin and saints for every day of the week! Being named Frances, I even had my own guardian saint with about seven saints I could choose from who had the same name. While I loved the richness of the stories and traditions told about these figures, I didn’t have a special connection to anyone of these beings.

I fell away from practicing Catholicism due to that church’s stand on women in leadership positions. I continued to do “my own thing” by praying and meditating. As the years passed, however, I noticed that the energy I held around the figure of Jesus continued to increase. I started to pray more frequently to him. Later, I came to see that for me, Jesus was becoming “center stage” not only as a deity to believe in but as an avatar of a purposeful and loving life which would well be worth emulating.

A number of years afterwards, this spiritual trend in my life seemed to be confirmed by another dream I had of Jesus riding by on a donkey, going from the left to the right. Again, the dream did not have much other meaning at the time; however, when I felt called to the priesthood and was accepted in the training program of the Episcopal Church, I began to see the dream as pointing the way to my new career: priests are supposed to be the embodiment of Christ on earth. They go through life simply and lovingly, and usually don’t drive flashy cars.

For me, then, these two dreams of a divine being represented the growth of a spiritual energy within myself. I do believe that inside each one of us are avatars of energy reflecting the transforming values and beliefs we hold most dearly. We only need to nurture these energies in ourselves so that we too can go in the wonderful directions they are leading us. Who is your divine nocturnal visitor and where is that being leading you? 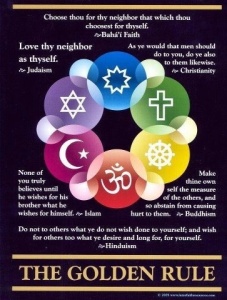 Image via Pinterest.
It takes intuition to live the Golden Rule.

Today, the world’s spiritual congregations are being challenged by so-called religious groups that promote non-loving, non-respectful and downright violent views in the name of a respected religion. One only has to call mind the disrespect and violence done to women in the name of religion which can range from not allowing women a voice in congregations or spiritual assemblies, ordination of women, or squashing attempts to let women get an education to the all-out violence of killing, kidnapping, raping and injuring of young women in Africa and the Middle East for a host of reasons that boggle the imagination. Then there are similar practices that have occurred against gays and people of another color or religion—again all in the name of one religion or another.

Underlying this disrespectful and violent extremism—and it really doesn’t matter which religion you are talking about—is a narrow minded, dualistic, bigoted, myopic, us-against-them fearful attitude which cannot see the beauty, or the need of diversity. It can only see in black and white. It cannot see the grays. It is often sexist.  It quite often too literal, wanting the pat and ready answer, the non-poetic response. It follows the rules to an insane degree that harms others.

Religious extremism cannot see the big picture or the underlying unity which recognizes that no matter what you do to someone else, you do it to yourself. If you kill another person, you are killing a part of yourself. If you injure a woman, you are injuring the woman within you.

Intuition, the capacity to see with the open, empathetic heart, is the capacity to feel what another person is feeling because one can put oneself in that person’s shoes. What that person is feeling is something you are also capable of feeling. As a result, intuition lets you know that what you do to another person is what you are doing to yourself.  You need an intuitive awareness to understand and practice the Golden Rule, which is a cornerstone in all the world’s main religions.  Most little children have this but lose it because it is rarely taught or practiced.

Perhaps the world’s great religions should teach more about intuition and learning to see what it feels like in another’s shoes, rather than preaching phobic attitudes, demeaning persons who are different, or imposing rigid rules and regulations. Maybe then, we might go back to the wisdom of the founders of those religions and regain some of their inspiring and life-giving energy.

You are not alone if you have or have had nightmares. Everyone has them from time to time, and many people are literally jolted awake by their power and intensity. Quite often, nightmares are the vehicles that bring people into dreamwork, and that is a good thing. Working with nightmares is the best way to mine the gifts hidden within them. Ignoring nightmares often makes them worse, especially if they turn into unwelcome repetitive visitors.

What to do if you have a nightmare:

In my experience with dreams, I have found that it is the nightmares that provide the greatest opportunities for healing, blessing and resolution of major issues in life. They are the dragons that contain the hidden treasure. And it is your job as the warrior dreamer to tackle the dragon!