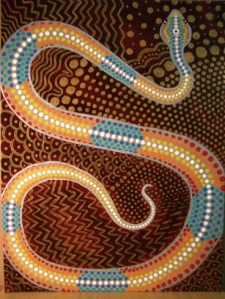 Image via Pinterest.
The commonest dream symbol of transcendence is the snake. — Carl Jung

Much has been written about snakes in dreams because their appearance is very common. The snake can have many meanings, and the dreamer needs to sift through the various possibilities. From a health perspective, the snake is often portrayed in mythology as a healing animal perhaps because a snake’s venom could be an antidote for certain ailments or the bite of a snake. Snakes were kept as sacred symbols in the aesclepian temples of ancient Greece for of their reputed healing powers. They were considered a symbol for the Greek god of healing, Aesclepius. The long association of snakes with healing can be seen today in the caduceus, a common symbol for the medical profession, which is made up of two snakes wrapped around a pole.

So let your snake dreams grab your attention, just as finding a snake in front of you would, especially if you dream of snakes coming to you or you are being bitten by a snake. The bite and release of venom can represent a transfer of healing power. If you have a dream of this sort, or dream of being bitten by any animal such as a spider, dog or bear, you should pay attention. It may be a symbol of this animal’s unique healing power or wisdom coming to you if it doesn’t have any association with a bite you may have received in waking life.

The snake is also a common symbol for kundalini, the powerful healing energy latent in everyone’s body at all times which, according to Hindu legend, releases its power in small amounts to keep us all healthy. It can be activated in larger amounts to bring significant healing and transformation at all levels of the mind, body and spirit. The symbol of a yellow or golden snake coming to or wrapping itself around the dreamer is common in dreams for persons experiencing kundalini releases. The following is a powerful and hard-to-forget dream I had in 2003 which presaged my own kundalini event in 2007.

DREAM EXAMPLE:
Two huge golden snakes are entwined about my waist and abdomen.

Even though this dream was full of numinous energy and the snakes literally glowed, at the time I had no idea what this dream meant. I only knew it was so important it shocked me awake. These snakes were as big as pythons. I wrote the dream down. Only after my kundalini release in 2007 did this dream make sense. That’s when I received much healing in the second and third chakras which are located in the areas that the snakes coiled. My dreams seemed to be telling me that I had literally become the caduceus! My body was the pole and two snakes were wrapped around me. I don’t think it was an accident that the gift to work with energy healing came along with this kundalini experience.

Other symbols that portray healing kundalini energy are lightning bolts, volcanic eruptions and the number 66. As mentioned before, it helps to have a good dream dictionary which gives many possible meanings for a symbol rather than a cut-and-dry single definition. Get to know your snakes. It may save your life!

To learn more about dreams, visit my website: http://www.healingdreamgarden.com.

2 thoughts on “Working With Dream Themes: Snakes in Dreams”